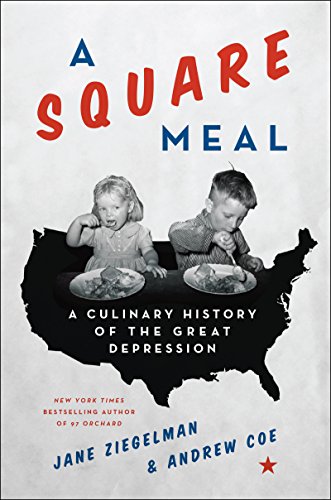 A Square Meal by Jane Ziegelman and Andrew Coe looks at an especially interesting moment in American culinary history — the Great Depression. At a time when capitalism failed the country so spectacularly — when unemployment was high, poverty deep and hope on the run, we still had to eat. And it was not easy for many. Businesses were closing or contracting so laborers were out of jobs and agricultural prices were low so farmers were broke, and there was no relief in sight for either group. Everyone was forced to do more with less, especially those — and there were many — close or already below the poverty line, who had to stretch a handful of ingredients in depleted pantries to feed entire families.

The authors shine a light on that struggle to survive and procure food balanced against efforts to make nutritious satisfying and, occasionally, delicious meals. Along the way, they look at the regional specialties, national culinary trends, scientific thinking, state, federal and local relief efforts and some pretty interesting recipes (like creamed lima beans, deviled eggs in tomato sauce, stuffed onions, Milkorno [an unholy nutritional supplement of dehydrated corn and dried milk] chop suey or prune pudding).

It’s a surprisingly light treatment of an especially dark time, when people were literally starving and the health of an entire generation was imperiled (especially given what we now know about the link between developmental nutrition and long term health). And though it stayed a bit too much on the surface for my liking, that may be due to giving equal weight to the politics, social and cultural context and food history and recipes. Any one of those elements would be enough to carry a book, and they chose to weave all three together. And I was surprised to see such a brief wrap up at the end of the last chapter. I wanted a full ending chapter putting into cultural and historical context some of the things they learned along the way. I guess you could say I was hungry for more.

Still, it was engaging, fascinating and another grim reminder about the flawed but persistent myth of American self-sufficiency. I found it especially disheartening to read about the contortions the federal government and politicians went through to try and avoid giving handouts to starving people to prevent them from becoming “dependent.” At a time when lax regulations and Wall Street greed caused our economy to grind to a halt, welfare regulators refused, for example, to provide mustard or vinegar in already inadequate relief supplies because the needy might “begin to feel too much like other and families” and lose the will to support themselves.

With lots of interesting asides about American cookery, the WPA, hoboes, farm life and more, it’s well worth the time, if only to ponder just how far, thankfully, we’ve come from creamed lima beans, savory gelatin molds and Milkorno.