Home > The Cowboy and the Vampire: What every bunker library needs

The Cowboy and the Vampire: What every bunker library needs 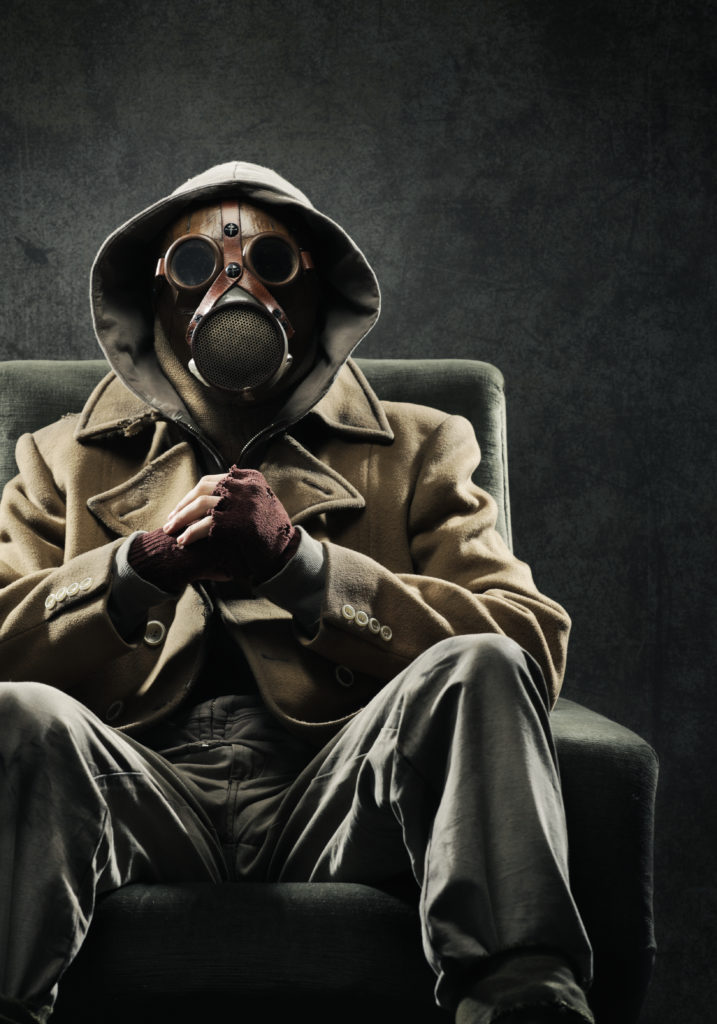 Joining us today from the pages of The Cowboy and the Vampire Collection is Lenny, a survivalist and improvised weapons expert with some peculiar political views. He’s the long-time friend of Tucker and has, by necessity, become an expert in making weapons capable of dispatching the undead.

Hello Lenny, welcome. What did you bring with you today? This? It’s a reverse surveillance tracker I made out of an old cassette recorder, a GPS unit and an electric toothbrush. I want to be able to monitor whoever it is monitoring this conversation to find out where they are broadcasting from.

Lenny, is fair to say you are a conspiracy theorist? Not really, no. “Theorist” implies that it’s hypothetical. There’s nothing in doubt here. I prefer to think of myself as a conspiracy realist.

Can you describe a few of the plots you think are real? You’d like that, wouldn’t you?

Pardon me? I mean, you’re part of the mainstream media. You’re in on it. You have your role to play, keeping us distracted and uninformed, and you’re doing a great job by the way, but I know you’re in on it. You’re all in on it.

What is “it,” exactly? Only the single largest transfer of wealth since the 19th century rise of the robber barons.

And the wealth is being transferred to … ? You are really going to make me say it, aren’t you? Off planet.

The wealth is going off planet. They need our gold to survive. Every few hundred years they run out. They can’t grow it on their home world. Think about it, gold used to be so plentiful here. The Aztecs used it like we use paper. Now it’s a “precious” metal. Hard to find. But it’s been incubating and it’s ready to harvest again. And Wall Street of course was created to concentrate wealth away from humans so they can use it to buy all the gold up again. It’s being loaded into space freighters as we speak and shuttled off the planet.

All right. How long have you had such arcane insider knowledge? I was in the military for a while with deep clearance and I saw a lot of things, things that would blow your mind. Roswell, grassy knoll stuff. I worked in a top secret weapons research lab. Probably would still be there but I was exposed to some neurotoxins, low levels. It was an “accident.” Nothing to worry about, I felt fine, but they weren’t willing to risk it. I slipped away before they could lock me up in military prison. I moved as far off the grid as I could find: LonePine, Wyoming.

How do you know Tucker? We’ve known each other since the third grade. He’s a good guy. We lost touch when I was gone, but picked right up again when I came back. Sometimes we meet up at the firing range, other times he comes by the place and we have a beer. You know he’s dating a Vampire. That’s a little weird. I don’t see him as much during the day any more. Can’t say as I blame him, she’s a real looker — June, if you’re reading this don’t get all wound up, she’s nothing compared to you — but pretty high maintenance what with all the vampires chasing after her. You know, I never would have guessed there was such a thing as vampires before all this, but it makes sense.

How so? Think about it. A powerful group of strong, ruthless, immortal creatures that feed on humans? No surprise they’ve been behind the scenes orchestrating events to their liking all these years. They’ve been called a lot of things: Illuminati, Secret Council, Star Chamber, Hall of Elders. It’s clear if you look at the history books, someone — something — has been shaping our progress. Something besides aliens, I mean. At least I know Vampires can be killed. I’m not so sure about aliens, not yet anyway.

What sorts of weapons have you been cooking up for Tucker? Nothing too fancy. At first we didn’t know what would kill them. Wood? Fire? Holy water? Garlic? Some combination? We were kind of working blind. All we really knew for sure was that sun was terminal. We messed around with some different ideas, but in the end, the classics ruled the day. I sharpened up some dowels on the lathe and then seated them down in 12 gauge shells with a little copper sheath on their butts to keep them from splintering. You can just drop them down into a sawed off double-barrel. And then I made up some thermite grenades to scorch them. All that other stuff, the holy water and the garlic, that was all just worthless.

What’s the future looking like for you? I’ve got a bad feeling. A worse feeling than usual. I’ve been spending a lot of time outfitting my fallout shelter. Stocking it up with lots of food, weapons and supplies. I’m kind of thinking about going underground for a little while, just until things calm down a little. I actually kind of like living underground. The radio waves can’t reach you. And June can work wonders with freeze dried eggs.поисковая оптимизация сайта на google